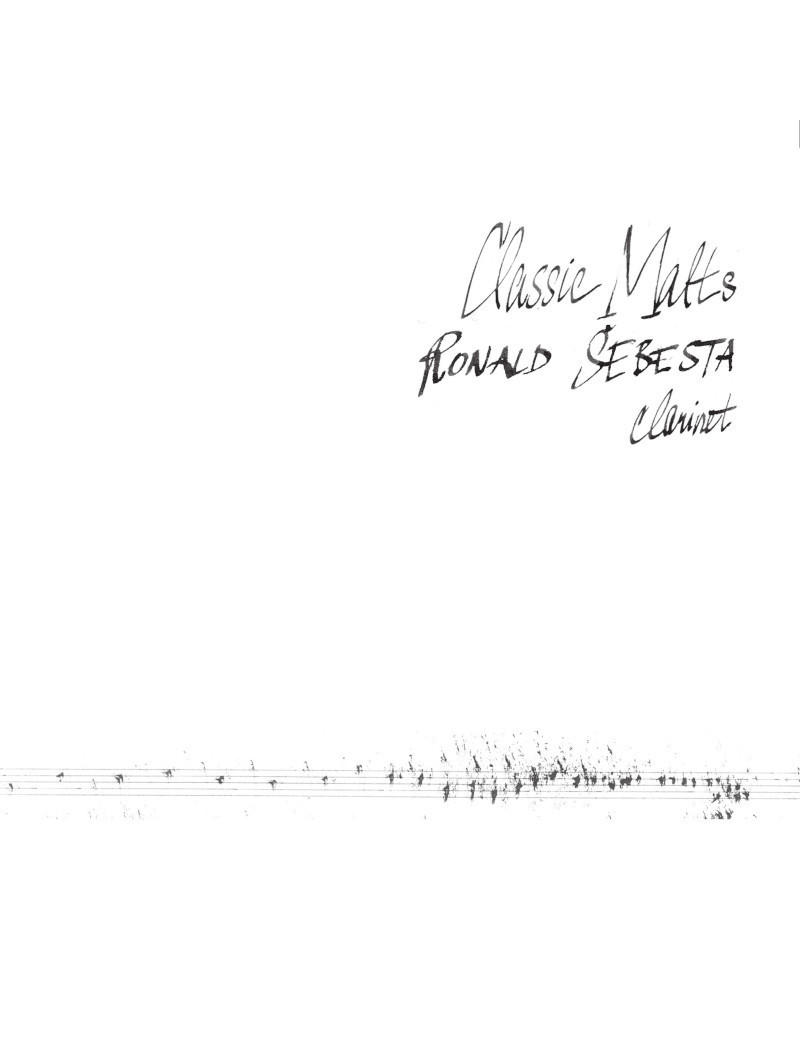 Ronald Sebesta plays works for different types of clarinet as well as interesting work by Steve Reich for 11 clarinets.

It was in 2012, on a commission from my friend Jozef Lupták for his festival of chamber music Convergences, that I produced the dramaturgy of Classic Malts. A concert recital for solo clarinet was a challenging idea, which I accepted not without misgivings. I fashioned a dramaturgy which was based on the contrast of all of the works included with one another. The greatest weakness of such a recital could be the monotonous character of the clarinet as the solitary medium: I allowed myself to be led by this insight. Accordingly, each successive piece from its very first notes had to represent a different musical character. The recital also had to be a selection of solo clarinet pieces proven in the test of time. Hence classic malts, a metaphor taken from the world of Scotch whiskey. I eventually overcame the constriction of monotony by selecting a work which used the technique of multiphonics (Let me die before I wake), as well as a work with a real polyphonic recorded multi-track technique (New York Counterpoint). The success of the recital when premiered at Convergences surpassed expectations. That was when my artistic career entered its golden time. On the dramaturgy of the album and the composers selected, some brief personal observations: Igor Stravinsky’s Three Pieces for Clarinet make up the first composition for solo clarinet in the era of modernism, and therefore they must open this album. The originality of each of them, measured by anything that had been written for the clarinet previously, is testimony to the Mozartian talent of this Russian master. Giacinto Scelsi, an Italian nobleman, a mysterious figure and likewise a great master of music for the univocal medium. Ixor. The influence of non-European tradition was a very powerful feature of his musical language after he had spent time in the Buddhist world. Salvatore Sciarrino, another Italian master, gave the clarinet an exceptional piece with a genuinely sounding polyphony and an illusive harmony. This composer has a brilliant grasp of the multiphonics technique as the sustaining principle of the composition, while at the same time he elegantly avoids all arbitrariness. What remains is pure music. Enigma Let me die before I wake. Karlheinz Stockhausen, heir to the great German tradition, with the painstaking musical jigsaw for clarinet which he wrote as a birthday present for Suzanne Stephens, a devoted lifelong performer of his music. In Freundschaft, small monumental variations for solo clarinet. Steve Reich, a Jewish New Yorker, and his homeland America as the melting pot of nations. New York (“the whole world is there”), with its free relationship to world musical tradition, engendered an original derivate of repetitive music. In a short time Minimal conquered the whole musical world, and it won my own heart too in my young days. The recording of the famous New York Counterpoint which I made for this album is certainly one of only a few that were not done in studio. This one was conducted in a natural acoustic space without additional acoustic interventions. Gérard Grisey, the French master, is heir to another great tradition and a creator of music that makes an impact by its exceptional originality. His Anoubis - Nout is a bonus double track in the album: originally it was not part of the Classic Malts recital. The composer’s choice of contrabass clarinet as a solo medium, and the originality of his musical thinking, culminated in a composition with a truly unusual sound. That I was capable of including this extraordinary piece in my album is my great silent joy. Its presence is the grand climax of the principle of contrast in the entire set. I performed the Classic Malts recital on English clarinets of the Peter Eaton brand. These outstanding instruments have become intimate companions of my artistic efforts in recent years. I think they and I will stay together to the end of my musical career.
The recording was accomplished in the Csáky mansion in Veľký Biel in August 2017 and September 2018, with the support of its owners, the Krivosudský couple, to whom I offer my deep and sincere gratitude. Thanks equally to my friend Ján Krigovský for unselfishly facilitating this opportunity.
Special thanks are due to my Viennese friend and colleague Reinhold Brunner, who generously lent me his Henri Selmer contrabass clarinet for the purposes of this recording.
I dedicate this album to the teacher who in my youth had the greatest influence on my professional formation. He is the French clarinetist, and outstanding musician, Jean Max Dussert.
Last but not least, I want to thank my old friend Daniel Matej for his uniquely formative and expansive influence, in the days of my youth, on how I viewed the world of contemporary music.