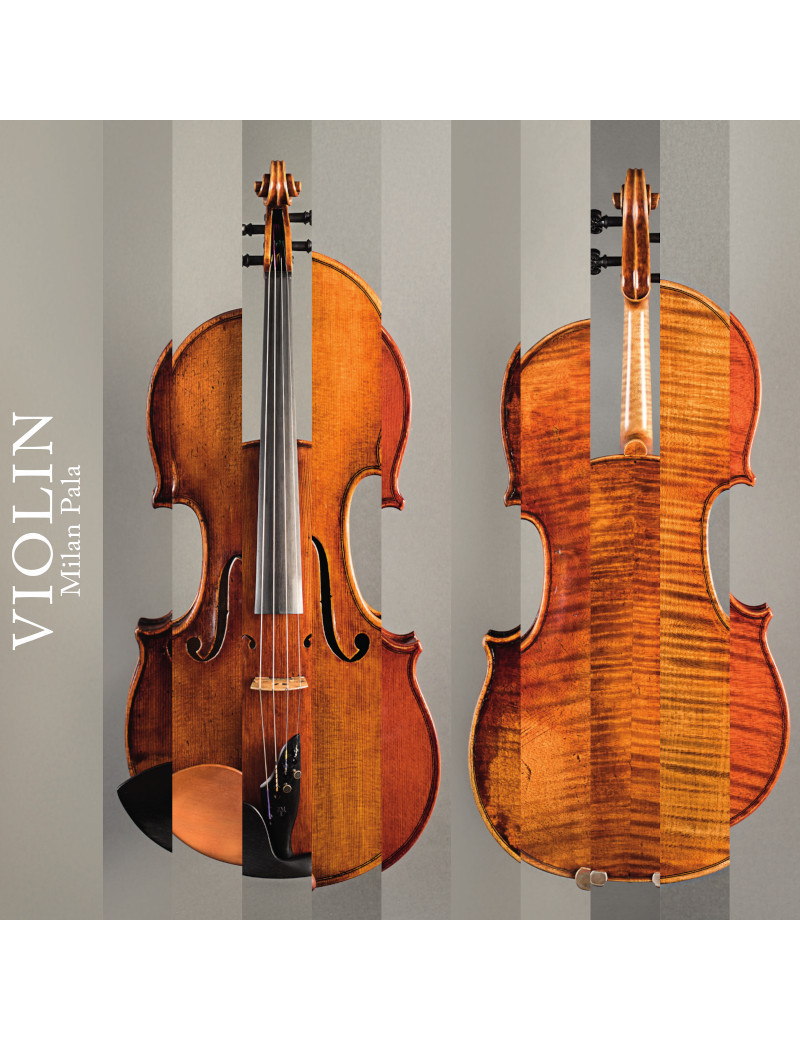 Master in playing the violin Milan Pala uniquely interprets classic works of the five violin. Two violins are from the 18th century and the rest of the works of contemporary violin makers Bursík.

Sonata in Re maggiore per violino solo

This CD contains music for the solo instrument - violin

Sound Director and Mastering: © Rostislav Pavlík ● Music Director: Milan Pala
Executive Producer: Rostislav Pavlík ● Notes: © Bronislav Bursík
Translation: © Jana Irshai ● Graphic Design and Photography: © Julian Veverica
The violin is one of few things whose appearance and method of construction has not been affected by the passage of centuries. Apart from perhaps a few tiny details, its construction has not changed for 400 years. It is quite common that ancient instruments are not merely artifacts on display in museums, but fully-functional and in daily use. Although the oldest violins are ubiquitous and still serviceable, each century new models are created that reflect the fashions and preferences of the time and capture important developments, both aesthetically and in their sound. Instruments by the best contemporary violinmakers thus become equal partners with those built far in the past. Today, world stages are podiums for old and new instruments, both in orchestras, quartets and in the hands of soloists, and together they produce a sound from which it is impossible to distinguish that between them exists an age-gap of hundreds of years.
On this unique CD, with the violin by Paolo Falco and Joseph Pauli, we journey back to the 18th century, and then return to the present, thanks to the Czech family violinmakers, Jan H. Bursík Filius, and Bronislav Bursík.
The violin from the late 18th century was made by Joseph Pauli,  a violinmaker from Linz in Austria, who worked from 1812 in Vienna.  His work shows the influence of Stainer and J. G. Thira and later an Italian touch, particularly from the Amati family.  This fine instrument with a subtle and elegant shape has low, Italian style arches and distinctive chestnut varnish which gives it a pleasing look and colourful sound.
The Violin, “Allegretto”, built in 2014 by Jan H. Bursík is the supreme work of the founder of the Bursík family of violinmakers.  Delicate craftsmanship and attention to detail are combined in the aesthetics of the entire instrument.  The expert eye of this master violinmaker has chosen varnish which adds depth to the long-seasoned, quality wood and the golden-amber colour lights up the whole instrument. The inspiration for this violin, with its impressively mature and dark sound, was a model by Antonio Stradivari from around 1715.
The Italian violinmaker Paolo Falco built this instrument in 1751 in Cremona, at a time and place that became the inspiration for future generations of violinmaking.  He was inspired by violin maker Carlo Bergonzi.  His instrument, with low arches and fine detail work, is a wonderful example of the work of the Cremona masters. Regular dense reed lines on the top and beautifully flamed maple on the back together with oily golden-brown varnish all add to the instrument’s beauty, charm and reverberating tone.
The “Gennaro” violin, made in 2010 by Jan H. Bursik Filius, was built with the greatest precision and carefully chosen, well-aged wood.  It was made for the International Violin Making Competition in Mittenwald in Germany.  This model of Stradivarius has a fine line, with reed lines on spruce belly and  maple back with strong flame patterns. With its golden-red varnish, it is elegant and noble in appearance and has a broad, colourful tone.  At the International Violin Making Competition it was awarded almost full marks for sound and was overall ranked 15th of over 180 instruments from around the world.
The ”Omayra” violin, built for Milan Pala in 2015 by Jan and Bronislav Bursík. It is inspired by an Antonio Stradivarius model and is made from Italian spruce which has been aged for decades and deeply flamed Bosnian maple. This violin, with its exceptionally broad and unusually coloured tone, was created in memory of an accident that occurred in Armero in Columbia in 1985. A young girl, Omayra Sánchez Garzón, was left trapped in the mud after the eruption of the Nevado del Ruiz volcano, and she tragically couldn’t be saved. Jan and Bronislav Bursík built this instrument with finesse and flair and it bears the girl’s name, so that her voice can speak to the world through the music of the violin.
text: Bronislav Bursík translation: Catherine Zatloukalová
The sonata has been around for over 400 years. It is not important to discuss when it came into use (around the end of the 16th century), but it is significant that over this relatively long period of time it acquired a status that not only belongs to the young string quartet, but also the more robust symphony. The sonata began life as more of a didactic exercise, and was then later used to demonstrate technical bravura. Later, it became a research laboratory for the form, and finally a volume of philosophical reflection and mystical teachings. The sonata has been written for countless instruments, with virtually endless possibilities. Of all the “classical” solo or collaborative sonatas, those for solo violin can be said to be extraordinary. For composers and performers, the sonata is the ultimate compositional and interpretative challenge.
The five sonatas on this album represent a cross-section of its history and also demonstrate its uniqueness. Tartini, Godard and Ysaÿe were themselves        violin virtuosi, and through their works they were expanding the technical and expressive potential of the instrument, which shows the rapid development of this idiom. The individual elements are seemingly reflected from one sonata to another, but always in a new context and at a higher quality of structure and expression. Finally, neoclassical three-part structure of Prokofiev’s Sonata and the expressive sonata of the mystic Emmert are evidence of its unceasing diversity, even in the music of the 20th century. But the one element which binds all five works together into one unique experience is the rich and noble tone of the violin which has inspired and delighted since time immemorial.
text: Marián Lejava translation: Catherine Zatloukalová
Published with the support of the city of Brno
By buying this CD you get the chance to download free version of this recording in higher quality
(5 channel stereo version in FLAC format). Here is the information: