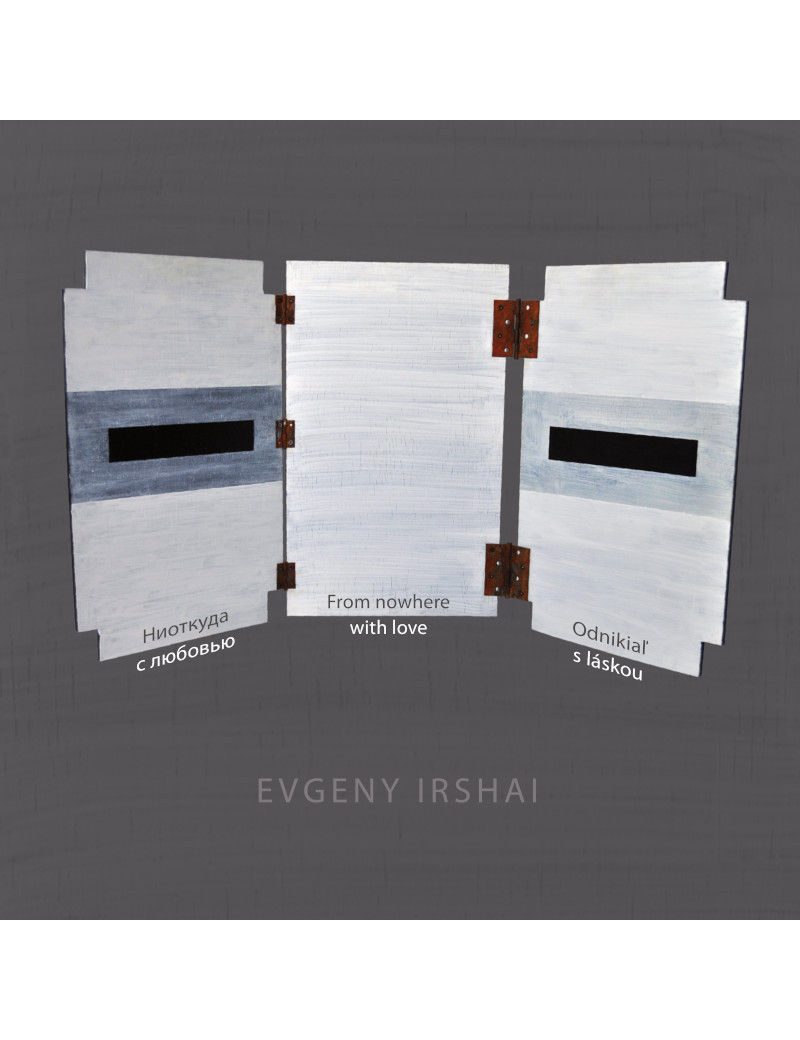 From nowhere with love - Evgeny Irshai

EVGENY IRSHAI ∙ Ниоткуда с любовью
1.  From nowhere with love for accordion and piano (2008)    8:53
Pimpampunchi for violin solo (2010)
2.   I. Coccinella 1:46
3.    II. Leppäkerttu 1:42
4.  III. Pimpampunči pizzicato 1:44
5.  IV. Buburuža 1:06
6.  V. Simple song 3:10
7.  VI. Mariquita 2:07
8.  Soundquake for accordion and piano (2009) 2:58
Exodus for piano and 2 tam-tams (1996)
9.    I. Con moto 13:24
10.  II. Misterioso, espressivo. Con moto. 14:21
11. Summer garden ∙ snow is falling for piano solo (1997)  5:18
12. Bahagobu for accordion solo (2011) 6:09
13. Sonata № 3 for violin and piano (2013) 12:50
Cover picture:  Evgeny Irshai – Oltár (olej na dreve, kov) 2004 / Evgeny Irshai – Altar (oil on wood, metal) 2004
violin: Milan Paľa ∙ accordion: Peter Katina ∙ piano, tam-tams: Evgeny Irshai ∙ notes: Evgeny Irshai,
Translation: Jana Irshai ∙ Recording, Mastering: PAVLÍK RECORDS ∙ Producent: OZ ROSSIJA
Sound Director: Rostislav Pavlík (1-8, 12-13), Jaroslav Stranavsky (9-11)
The original idea of releasing this CD belonged to the chairwoman of the association Rossija, Oľga Dašková. She was the initiator of the project and thanks to her energy the funding for this CD could be found. Although it may sound trivial, music recorded on this disc is primarily about love. I am not to define what I understand by this word. It is too wide a concept and every one have right to see it in their own way. When we discussed bringing out a CD for the first time I immediately thought of the composition I dedicated to an exceptional Russian poet and Nobel Prize laureate, Joseph Brodsky and that I wrote so much impressed and touched by his incredible poem From Nowhere with Love. So we came up with and idea of recording the music that I wrote in emigration and that is, in any way, connected with St. Petersburg where I was born and lived for so long; with my friends that I have known so many years and with the culture that has been shaping me. I also want to dedicate this CD to all Russian emigrants. One in emigration sees many things very differently. It may be banal to say so - I accept that… It is known that about 70 percent of the human body is made up of water. Everybody knows that and it too may now sound banal. But how much banality have human beings inside them? I am not saying anything new, but banalities, but I can always hope that each of them (especially those in music) I can speak with my own intonation. I have loved poetry by Joseph Brodsky from the moment I first encountered it. From Nowhere with Love is and probably always will be one of my favourite poems of the 20th century. For quite a long time I wanted to compose music to this wonderful text. I do not really know why but I always thought I have to use the whole text and that it must be sung. Then I understood that the main thing is to convey the atmosphere of the poem, the feelings and sate of soul it brings forth. I am still not sure I managed that. Brodsky wrote this poem in emigration in Russian and translated it later into English. I personally prefer the translation by Polina Belkina.
(http://www.users.cs.umn.edu/~safonov/brodsky/part_of_speech/from_nowhere_auto.html)
Now, let me say a couple of words about the compositions.
Sonata Exodus for piano and two tam-tams is dedicated to my daughter and was composed in a very difficult period of my break-up with her mother.Bahagobu (dedicated to Peter Katina) got its name from the first tones it originated from. I later changed the beginning but I didn’t change the title as I like its, rather mystical, sound. Six short pieces for violin solo Pimpampunchi (from Flemish Pimapmpoentje – ladybird) were composed for an outstanding Slovak violinist Milan Paľa who usually performs them as additions. Summer Garden - Snow is Falling, miniature for piano, was inspired by the famous Summer Garden in St. Petersburg, so much celebrated by so many Russian poets. And at last, Soundquake was inspired by the brilliant novel Timequake by Kurt Vonnegut. Music is abstract and it is very difficult writing about it – especially about one’s own music. One cannot boast and does not want to criticize. So, my dear listeners, I leave it all up to you...