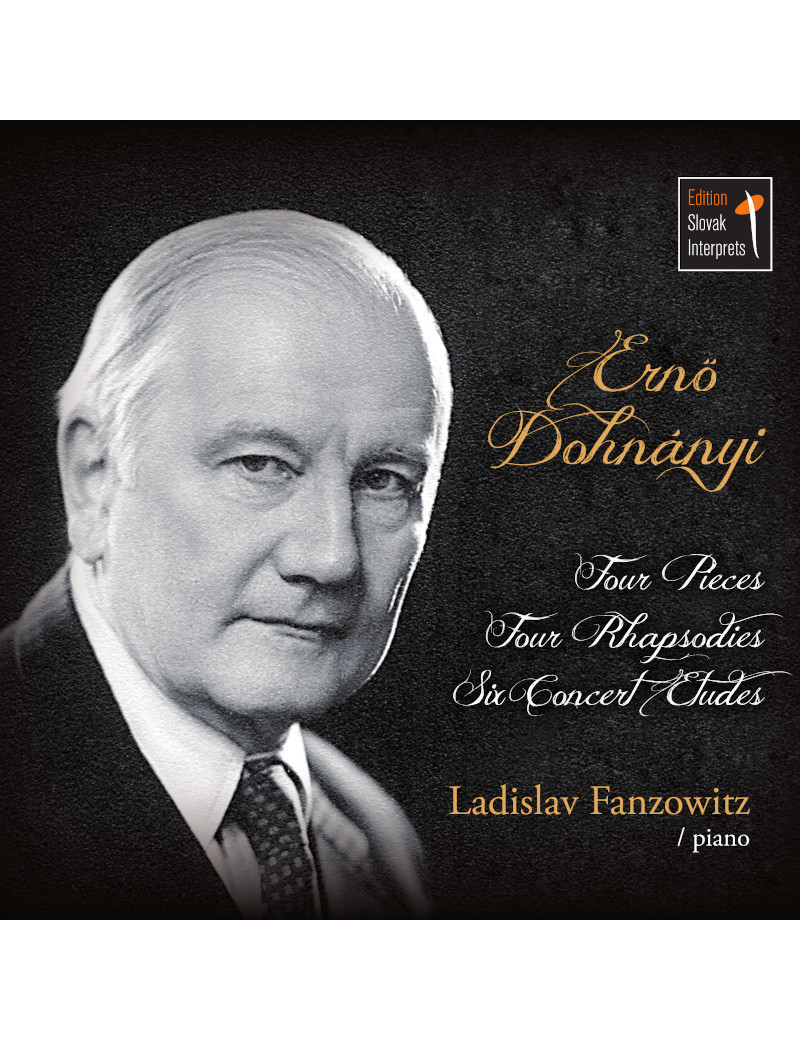 “... In 1920 Dohnányi was performing in front of the audience in Budapest on average fifteen times a month. We could assume that his charm faded over time. However, the fact was at Dohnányi’s concerts even the podium used to be fully occupied up to the last square meter. There were hundreds of listeners standing by the walls at each concert, and he could even play every day. (This also happened at times.) It was obvious that his perform- ances were shared by the whole city.“

Bálint Vázsonyi: Ernő Dohnányi, 1971/2002 Bratislava (Pressburg in German, Pozsony in Hungarian), the capital city of Slovak Republic used to be the capital city of Hungary (1536-1784), and the coronation city of Hungarian kings (1536-1830) in the past centuries. After professional institutions returned back to Budapest, the small city (about a 40-thousand inhabitants) was threatened by social and cultural decline at the end of the 18th century. Part of the edu- cated bourgeoisie of Bratislava nevertheless did not lose contact with European cultural events despite

forced provincialism, proof of this being the lively urban musical life in the19th century, with the concerts of top musicians, including Clara Schumann, Anton Rubinstein and personal visits of Anton Bruckner, Johannes Brahms and others.

Franz Liszt brought a unique dimension to the history of Pressburg. His special relationship to this city is demonstrated by extensive correspondence with a number of citizens, many public and fundraising concerts for urban hospitals in favor of funding for a memorial to Johann Nepomuk Hummel, and last but not least, the ceremonial presentation of Hungarian Coronation Mass in St. Martin’s Cathedral with the composer himself conducting in 1884.

Liszt’s influence was also reflected in the programs of concerts, which often featured works by contemporary European composers and presented interesting and attractive performers. An extensive collection

of archival concert programs, photographs and correspondence documenting the actions of F. Liszt in Bratislava, was made available to the public by The Music Museum of the Slovak National Museum in 2011 on the 200th anniversary of his birth.

In the cultural enviroment which was significantly profiled by F. Liszt, prominent members of one generation of composers grew: Bratislava natives Franz Schmidt (1874-1939 and Ernő Dohnányi (1877-1960) and Béla Bartók (1881-1945), and Alexander Albrecht (1885-1958), who moved to Bratislava from Transylvania. Schmidt, Dohnányi and Bartók received broad humanistic and educational foundation as students of the Royal Catholic High School at Klariská Street in Bratislava. One of the teachers of this important urban educational institution was Frigyes Dohnányi, a father of Ernő. He was a mathematician, physicist, inventor and professor at the University of Vienna.

Bratislava native Ernő Dohnányi (1877-1960) was, alongside Béla Bartók and Zoltán Kodály, the most influential figure of Hungarian music in the first half of the 20th century.

His first contact with music was brought by his father, Frigyes Dohnányi, who, in addition to research and teaching, was playing the cello actively, and Ján Levoslav Bella was one his chamber music partners. Ernő experienced his first violin and piano lessons with his father, and expanded his education studying with the St. Martin’s Cathedral organist Karl Forstner.

As a 17-year old, he became a student of the Academy of Music in Budapest, where he studied composition with Hans Koessler and piano with István Thomán. (Based on Dohnányi recommendations, his younger colleague Béla Bartók decided to study with the same teachers a few years later). Through his teacher Koessler, Dohnányi came into contact with Johannes Brahms. After the successful premiére of Piano Quintet op. 1, held in Budapest on 16th June 1895, Dohnányi received a letter from his teacher which stated that Brahms would like to see him as soon as possible to play the work for him at Bad Ischl. The young composer, however, had no resources to travel and sent Brahms the manuscript of the Quintet instead. Brahms was enthusiastic about the work and soon organized two performances: in Bad Ischl (Kneisel Quartet with Arthur Nikisch at the piano), and in Vienna. In an interview with Koessler, Brahms said “I could not write it better myself”. As a 20-year-old, Ernő Dohnányi established himself as the most important Hungarian pianist after Liszt, considering his concert debuts in Berlin, Vienna, and London (Beethoven’s 4th Piano Concerto with conductor Hans Richter). In the late 90s of the 19th century, he already introduced himself to American audience in New York for the first time. Assuming Dohnányi’s exceptional technical disposition, practicing daily was not a necessity for him and his concert preparation consisted mostly just of reading the scores. In his

repertoire, he drew attention to lesser-known works by Mozart, Beethoven, and Schubert, and he was the first modern piano virtuoso, who interpreted chamber music intensively. Among his major accomplishments were the performances of Beethoven’s complete piano sonatas in 1920 and all of Mozart’s piano concertos in1941. Dohnányi was undoubtedly one of the greatest pianists of all time.

Thanks to chamber music, Dohnányi came into contact with Brahms’s friend Joseph Joachim, who invited him to teach at the Musikhochschule in Berlin. Dohnányi worked there in the years 1905-1915, from 1908 as professor.

In 1915, he returned to Budapest and his activities laid the foundations of modern professional music life in Hungary. As a pianist, conductor, teacher, and organizer, he strongly supported the composers of his generation: Béla Bartók, Zoltán Kodály and Leo Weiner.

Since 1916, he taught piano at the Academy of Music in Budapest, and worked out a modern study plan for the Academy. In February 1919, he was appointed Director of the Academy of Music, but after the political changes in October the same year, he was replaced by the violinist Jenő Hubay. In 1919, he was elected to become Principal Conductor of the Orchestra of the Budapest Philharmonic Society and remained at this post until the end of the World War II. In the years 1921-1927 he undertook extensive annual concert tours to the United States and in 1925 he was appointed Principal Conductor of the New York State Symphony Orchestra.

From 1928 he taught at the Music Academy in Budapest again as the head of the composition master classes and the piano class. In 1931, he became Music Director of the Hungarian Radio, and for the second time after 1934 Director of the Academy of Music. Among his students at that time were Géza Anda, Annie Fischer, Georges Cziffra, George Solti, and Ľudovít Rajter.

From 1939 Dohnányi faced Nazi anti-Jewish laws which he refused to apply. In 1941, to protest against these laws, he decided to resign from the Director post of the Academy of Music. In the Philharmonic Society Orchestra, however, he managed to keep Jewish musicians until the beginning of the German occupation of Hungary, when he was eventually forced to dissolve the orchestra. In the autumn of 1944,

as representative of the Hungarian Radio, he participated in the reception of Hungarian artists at the Budapest castle, which was held by the new prime minister and head of the fascist Arrow Cross Party Ferenc -Szálasi after the forced abdication and subsequent arrest of Regent Miklós Horthy. At the reception, photos of his handshakes with Szálasi were taken. His opponents took advantage of this at the end of the war and false accusations caused him long-lasting complications. The false accusations and slander after the Second World War grew to such a degree of intensity that the nearly 70-years old Dohnányi didn’t have the strength to defend against it any more. Moreover, he lost his two sons in the Second World War - one died in Russian captivity, the second was executed for trying to assassinate Hitler. Ernő Dohnányi spent the final part of his life overseas. After a brief pedagogical activity at the University of Tucuman (Argentina) in 1949, he became pianist-in-residence and composer at the Florida State University. He died in 1960, during a gramophone recording session in New York. Dohnányi’s name was cleared from the “blacklist” in Eastern Europe in 1968 and Bálint Vázsonyi’s biography, published in 1971, finally dispelled any doubts about his moral and political integrity. Although Ernő Dohnányi used gestures and techniques of the romantic tradition in his compositions, he never became an epigone. His compositional style is characterized by originality of musical content and expression, large concentration of musical material, lyricism, humor, and freshness. Dohnányi’s works are in 48 opus numbers. He created orchestral compositions (two symphonies, Symphonic Minutes, Suite in F sharp minor, Ruralia Hungarica, American Rhapsody), concertos (two for violin and orchestra, Konzertstück for cello and orchestra), stage works (operas Tante Simona, A vajda tornya, Der Tenor, ballet

Piano works are the most extensive part of Dohnányi’s compositional oeuvre. They include two piano concertos, Variations on a Nursery Tune for piano and orchestra, chamber composi-

He also wrote cadenzas to all the piano concertos by W. A. Mozart and the concerts no. 1 - no. 4 by L. van Beethoven. (He used to improvise cadenzas in Mozart concertos at live performances).

The Four Pieces for Piano Op. 2 composed shortly after the Piano Quintet op. 1 are inventive, pianistically challenging and rewarding. Barely 20-years old Dohnányi achieved great professional success in this pe­ riod: a symphony and the Zrínyi-overture received the Royal Prize; he graduated with honors in Composition and Piano from the Liszt Academy in Budapest. Together with Eugen d’Albert he made a successful concert debut in Vienna and in Budapest; he appeared with the legendary conductor Hans Richter on concert stage for the first time. Dohnányi dedicated the Four Pieces for Piano to his fiancée and later wife Else Kunwald. The first piece is a witty Scherzo in c sharp minor with unusual harmonic changes. It is followed by two intermezzi: a faster in a minor and a slower in f minor which is preceded by a quotation from a poem by Robert Reinicke: Wo Du auch wandelst, bin ich Dein, Wo Du auch weilst, Du bist ja mein, Ich hab ja Dich und meine Liebe /Wherever you walk, I belong to you, wherever you are, you are mine, I have only you and my love/. The Intermezzo in f minor is a rare example of an intimate personal testimony within Dohnányi’s creative output that was otherwise characterized by a tendency towards a faster pace.

Distinctive feature of his nature was his “impersonal” joy of musical shape, structure, form, game of contrasts, colors and shine. More of his personal emotional experience he put into his masterful and unique interpretations of piano works by other great composers.

The four Rhapsodies opus 11, dedicated to his friend and former teacher István Thomán, are full of original musical ideas as well. Dohnányi considered the Rhapsodies to be an interconnected cycle. In a letter to his third wife Ilona he wrote: The Rhapsodies can be considered as a sonata in four movements. The 1st Rhapsody is the first movement because of its simpler form. The 2nd Rhapsody replaces a slow second movement; the third corresponds with a sonata scherzo. The last Rhapsody, which processes the Gregorian chant Dies Irae, contains themes from the previous three Rhapsodies. I did not call this work “Sonata”, because its structure is looser and each of the Rhap-

sodies can be performed separately.

The Concert Etudes, Op. 28 are virtuosic concert compositions with lots of bravura effects. The pianist is barely provided a space to breathe. It requires extremely complex skills of technical readiness, stamina, and musical overview, to perform the pieces in the intentions of the composer: easy, playful and carefree. 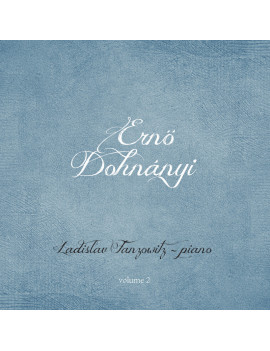 Ernő Dohnányi...
The second part of the new recording of the composer's piano works, which was born in Bratislava,...
€9.49 Price