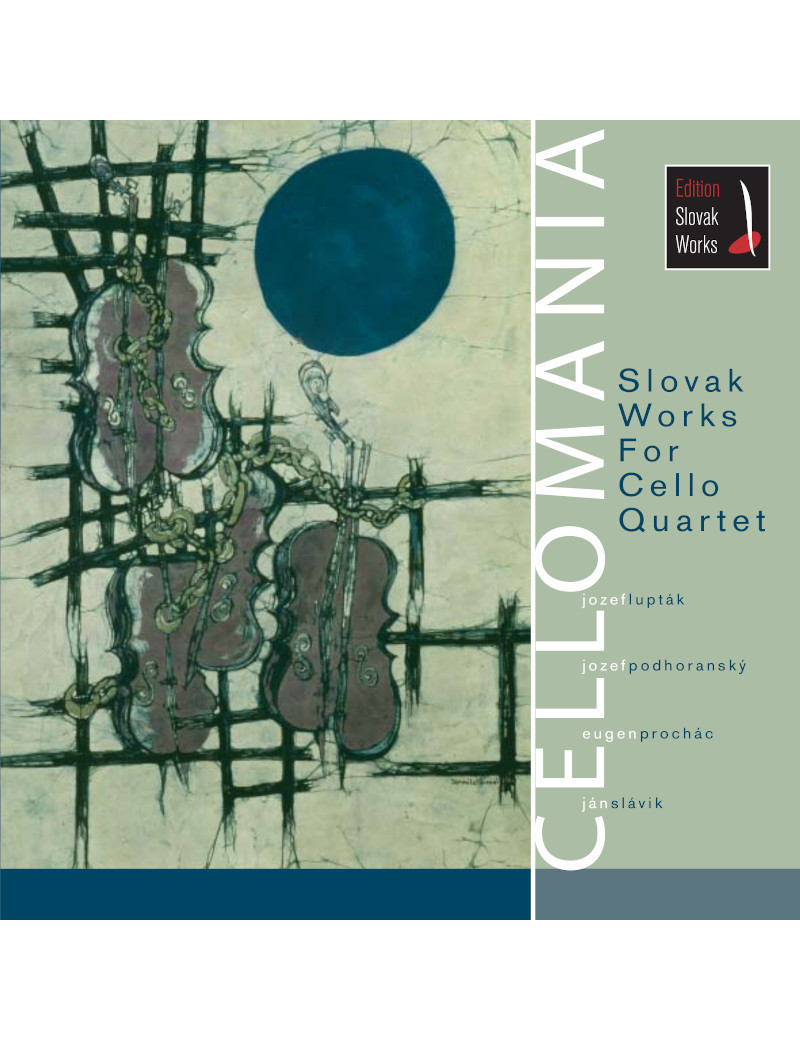 Cellomania ensemble was established in 2000 by its founder Eugen Prochác. Members of this group are significant Slovak cellists - Jozef Lupták, Jozef Podhoranský, Eugen Prochác and Ján Slávik. All musicians are active as soloists, chamber-music players, music teachers and they organize musical projects. The repertoire of the ensemble is quite extensive - from baroque to the contemporary music. It consists of adaptations as well as original compositions for this ensemble.

The ensemble cooperated with world-famous composer Sofia Gubajdulina. They introduced her pieces (quartet, septet and octet) during Melos Éthos festival in 2003. In October 2005 the ensemble brought in the world premiere of its octet version ”Cello Counterpoint” by Steve Reich. Cellomania is regularly taking part in the important Slovak festivals. From a number of foreign performances it is important to mention prestigious cello festivals in Beauvais, Paris, Regensburg and Budapest.

The anthem of Central European College in Skalica for cello quartet was composed following the order of this newly created college. But this very composition has its history. Before the composition became an anthem of Central European College in Skalica it appeared in 2002 in the improvisation of Marián Varga in his concert in Nitra. The author later used its simple melody resembling a folk-song. It was extended by part of 24 d-mol fugue by D. Shostakovich in incidental music in the theatre performance of “Žltá ľalia” (The ellow lily). Performance was directed in Astorka Theatre by Silvester Lavrík. The author took it over to his concert repertoire under the same title and further reformed it. When later asked to compose an anthem for cello quartet he realized that the slow and anthem-like character of the composition would be adequate for that purpose.

Cellist Ján Slávik inspired me to make an adaptation of my Musica Slovaca composition for four cellos. At he same time I realized that I do not have a composition for these instruments. That led me to composing Music for 4 cellos, which I dedicated to Slovak cello quartet. By the means of creativity and effort to create a masterpiece oneself expresses the inability to live in a big real world, it is an optimal substitution for it, that is the field I cannot be lost in. Maturity and old age close, forming the score again, in order to find what is missing in the society - the belief in higher aims. The strength of oneself is in his/her ability to dream and the beauty of art is in the ability to accomplish them.

Tack for four cellos was created in 1995 following a simple idea, melody, which had the odd pulse and was devided into five-beat cycles. To its variating effect of this melody I added also the “cantus firmus” in a way which it appeared in chant overture- fantasies for organ in the period of Baroque music era. The ability to combine the play of cellos using the string or playing pizzicato helps to emphasize the contrast of these two elements. The title of the composition can be translated as “Thanks”. The premiere of the composition was 2nd April 1995 during a concert in Gőteborg synagoge, Sweden.

I prefer cello to other music instruments for its unbelievable expressive and tone potential. That’s why I had much pleasure in accepting the offer of the cello quartet from Bratislava to compose a piece lasting 5-6 minutes for them. Its Italian name Cellitorrenti could be translated as the “cello stream”.

To write a composition for four stringed instruments is always a great challenge for a composer. In case of four equal instruments, in this case four cellos, it becomes even a greater challenge. So, after 3 stringed quartets, there is the fourth one, although bearing an unusual casting and hence an unusual name – Torus - circle rotated ring, flower bed. It is up to you to choose. Technique versus nature – which is an eternal clash. Who will be the winner? The theme I am dealing with, whether I want it or not in my string quartets (for example my second string quartet) is called “The touch”- Winter quartet. As far as the way of setting up the composition is concerned, we are dealing with four tone variations here - D=Es=C=H. It may evoke the initials of D. Shostakovich. I had much pleasure in carrying out the composition following the order of Ján Slávik, a dear friend of mine.

When ancient rhetors thought about the function of their works of art, they were talking, in accordance with language at that time, about moving, informing or pleasuring. „The Swan Song“ is a little thing. Its purpose isn’t to move or inform. Its aim is to please both the listener and musician. It is a gift, so let’s not scrutinize it.