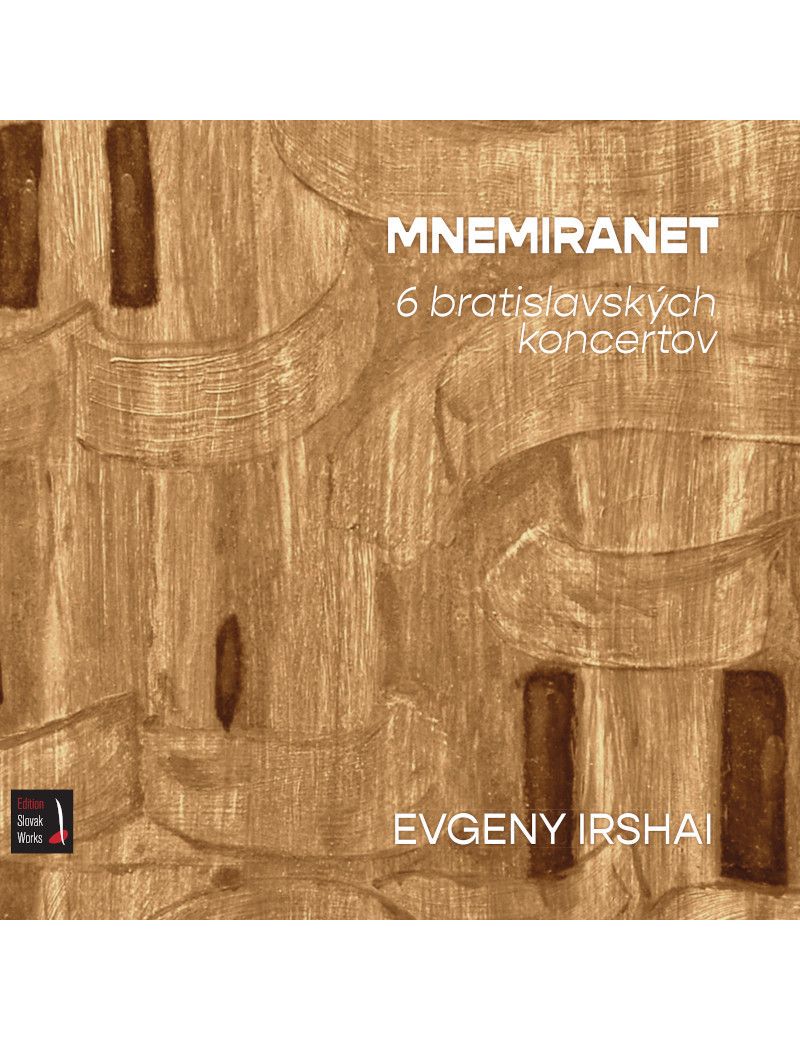 concerto for cello and strings

concerto for violin and strings

concerto for piano and strings

concerto for accordion and strings

concerto for viola and strings

concerto for violin, cello and strings

A composer, pianist and a lecturer at the Bratislava Academy of Performing Arts Evgeny Irshai was born in St. Petersburg (then Leningrad) in 1951 where he also graduated from St. Petersburg Conservatory. His origin and musical ancestry are reflected in his music that is deeply rooted in Russian culture and conveys fragments of the psychological subjectivism of Tchaikovsky, tragedy and mockery of Mussorgsky, vehement pathos of Shostakovich and polystylism of Schnittke. Irshai`s unique style indeed comes out of his Russian background. Yet, it also draws from his extensive knowledge and love of Western-European music that has, from early 1990s, been influenced by Slovak context, which it influences and enriches in return. It is only natural that Irshai`s personality drew a circle of skilled musicians. Thus formed conditions resulted in a rare musical cycle The Six Bratislava Concertos.

The idea, as it often happens, was formed rather inconspicuously. In 2007 a cellist Jozef Luptak commissioned Irshai for a violoncello and strings concert, which was to correspond with a concert by Joseph Haydn. It was working on this commission that prompted Irshai to create a cycle of concertos inspired by The Six Brandenburg Concertos by Johann Sebastian Bach (phonetic similarity of both titles is notable).

Between 2008 and 2013 Irshai composed pieces tailored to three young Slovak soloists and, being a pianist, one for himself. It is not a coincidence that three out of six Bratislava Concertos were written for a violist and violinist Milan Pala towards whom Irshai developed almost paternal relationship over the years and has composed numerous chamber pieces and concertos for him. Like he once said, he “would hardly had written so many compositions for violin had it not been for the acquaintance with Milan Pala“.

Also two more protagonists of this musical cycle Jozef Luptak (cello) and Peter Katina (accordion) have been Irshai`s friends and he had already composed several pieces for them. It almost feels like a musical family whose “playing with music”, packed with energy and uncommon creative empathy goes far beyond their four walls. This is proven by the composition Omni tempore (1999 – 2000) and many more pieces for solo violin or violin and piano (including three sonatas) Sonata-Corta for violoncello (2000), In the Space of Love for violin, piano and orchestra (2004 – 2005), Uangamizi for violin, violoncello and orchestra (2006), Bahagobu for accordion (2011), Maariv for violoncello and string orchestra (2013), And Isaiah Said for accordion (2014), Level of Stagnation for accordion (2017) and more.

Individual Bratislava Concertos were written with thorough knowledge of the soloists, their features and personalities, their technical skills and manner of performing and they can be perceived as the musicians` psychologically-artistic portraits. The musical cycle also carries obvious autobiographical features (the fact that the recording is dedicated to the memory of Irshai`s parents is in this case, too, significant) intuitively incorporated into each composition as it is reflected in the chain of their titles and from the authors commentary: “When I finished the whole cycle I realised that by chance the names of the concertos in a way reflect my life and emigration to Slovakia.”

When composing the Bratislava Concertos Evgeni Irshai chose a different way than Alfred Schnittke who wrote each of his six concerti grossi for various orchestra complements (Bach, after all, also chose various, although not as radically different orchestral complements in his Brandenburg Concertos).

Irshai approaches the old baroque form from an opposite end; in all six concertos he only uses strings. This may be due to practical reasons but also as a challenge to deal with the homogenous timbre of the strings in six different compositions in a way that does not become monotonous. Despite the different compositional approaches the concertos are interconnected in many ways thus creating a compact entity; similar length, obvious connections in ideas, distinctive (“deformed”) approach to old form and three-part division built upon the contrasts of individual parts but also similarity in motifs (or “leitmotifs”).

The first, violoncello, concerto Penetration (2008) is a journey to light; from the depth of continually condensed polyrhythmic matter through a devilish dance and toccata-like withdrawal the composition bears towards its hymn-like finale with its clear tonal melody in the high pitch of the solo instrument. It is a penetration into the unknown; searching and finding of the way – very similar to one we hear in the final sentence of Schnittke`s Cello Concerto No. 1.

The violin concerto Shinui tsura (2008) represents a very different way towards the same destination. Initial expressive chords in solo instrument seem like non-specified words engraved in stone. They are being constantly ground, gradually disappearing. What remains is a flimsy song melody at the end, identical to the one from the first concerto.

Concerto mosso (2010) for piano (or harpsichord) begins with rejoicing figurative passage in dynamic tempo that reminds of the playful Rondo from Haydn’s piano concerto. There is nothing to foretell the catastrophe that comes in the middle section: it is manifested in layered seconds that symbolically evoke a cross in the sheet music, a limping tango (here Schnittke again comes to one’s mind). An almost identical reprise of the first part brings back the brightness and optimism.

At first quite a mysterious title of the accordion concerto Mnemiranet (2011) was coined by joining three words from the Russian translation of the opening verse of Petrarch sonnet CXXXIV: Мне мира нет (I Find no Peace). The sonnet itself is not what the composition was based upon but the music in its substance quite accurately reflects incongruity of one’s life journey just like Petrarch captured it in his verses using antithesis and oxymoron: I find no peace, and yet I make no war: and fear, and hope: and burn, and I am ice: and fly above the sky, and fall to earth and clutch at nothing, and embrace the world…

Another riddle comes in the title of the viola concerto from 2011: Concert in P(ale) Mino(r) could roughly be translated as “Concert in MIlaNOR Pala”. Widening solo passage firstly arches above the misty orchestral glissandos then thrashes in tempestuous storm to be, in the end (anchored in a minor tonality) sung in a nocturne-like melody. Hearing viola’s moving tones one cannot be but reminded of verses by Karel Hlavacek: The viola I inherited I play just now and then, when the moon’s not quite risen and the dark covers the land…

An energetic concerto for violin, violoncello and string orchestra titled Slovakia, my Love (2013) introduces a new element into the cycle of The Bratislava Concertos – the local colour emerging from Slavic song melodics (author does not cite any particular song). The title as well as stylised folk music reflects the fusion with culture and the environment in which Irshai found a new home in the 1990s.

An intimate cycle of The Six Bratislava Concertos is in its concept, compositional capacity and musical content undoubtedly a unique opus. Even though each of the six concertos can be performed individually, their originality and urgency are best exhibited in the context of the whole cycle – i.e. in the context of the certain period of Evgeni Irshai`s life journey.