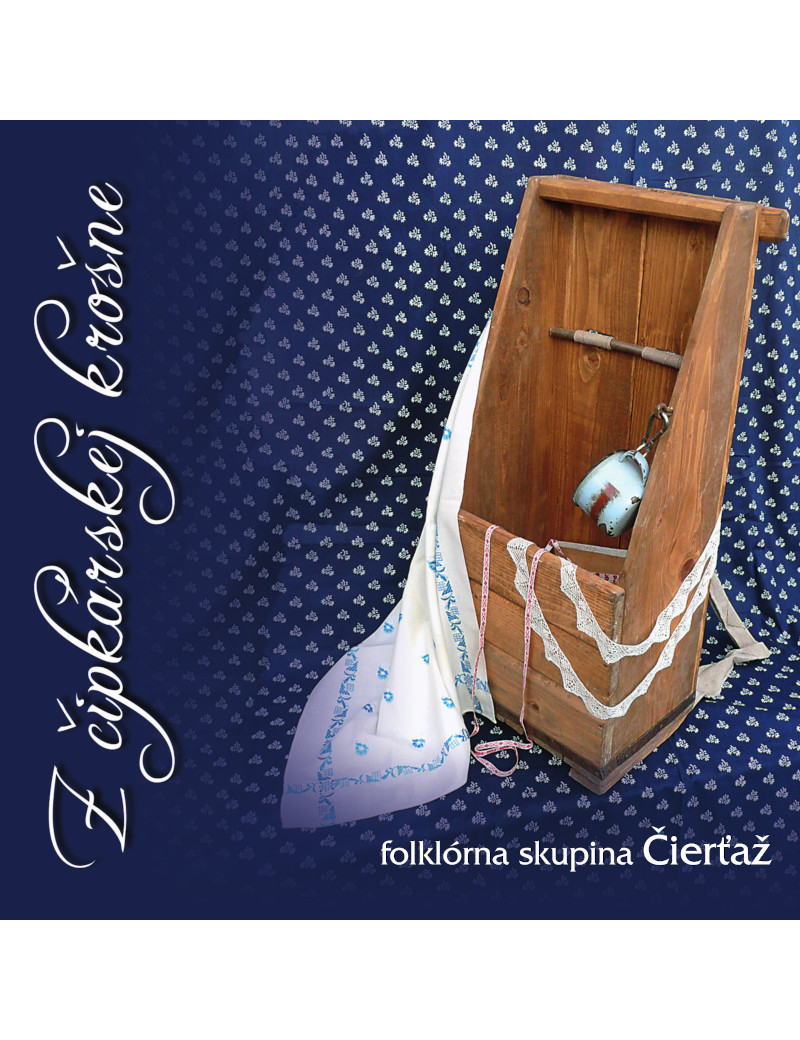 Lace-making as a cultural-historical phenomenon affecting the lives of the rural upper Hron continuously for several centuries. Čipkári - itinerant traders with lace, but also other haberdashery, textiles and hardware - his manner of life strongly marked expressions of traditional culture villages in the region between Banská Bystrica and March. They were experienced his-tobežníci who loom in the back or on horse-carriage prebrázdili criss-cross the entire Uhorsko. Bringing elements taken over from a foreign environment, in addition to traditional modes of behavior and dress codes greatly affected the musical folklore. Original songs and dances of this area began early in the 20th century retreat smarter repertoire spreading from a nearby city or small town. The fact that the population of lace-making village began very early in favor of modern methods of clothing or entertainment, resulted in almost complete disappearance of folk costumes and dancing and singing typical symptoms. Čierťaž folk group, active in Germany since 1997, is focused on research, animation and interpretation of sites have completely forgotten firm, zvykoslovného and dance repertoire of villages in which this itinerant traders lived.

Our CD in this form would not occur without the people who have been in previous years, a valuable resource songs and memories. In addition to older members of the folk group to be the oldest witnesses of our community. Among us are no longer Emilia-Kováčiková Plankoška (1913 - 2001), Mary-Kološtová Zaťková (1922 - 2010) or Stephen Lokša (1922-1999). Many thanks to the informant from neighboring villages - Anne Miklianovej of ash (1936) and Lydia Mistrikova of sales (1922). A major source of song material for our group was (and still is) a collection of composer Bela Bartok, who appeared in three volumes under the title of Slovak folk songs (the first part of 1959, the second part in 1970 and third in the works 2007). The Hungarian collector, who was also interested in the folklore of other nations Uhorska, in our area you chose a representative sample of lace-making village Medzibrod. Here in the early 20th century recorded many songs, of which the vast majority already in the original environment is unknown. A small amount of wealth of the collections we offer on our recording. Thank you to all who contributed in any way to ensure that our CD called The cradleboard could be a lace-making. I hope that at least partially fill the gap in knowledge between the traditional culture of this little-known folklore of the region.

Song lace-making culture of the region is among the areas of folklore expressions, which were public and experts should know, especially since, when it started to disappear from its natural environment. Songs and Dances of German villages, grinding, Medzibrod, ash and other non-repayable gradually fell into oblivion along with the traditional lace-making culture. Interested collectors of folk songs and ethnomusicology at a time when most of us conducted research area music and dance folklore-ment (ie after the 2nd World War), the community generally overlooked. Attention is more focused on the seemingly more focused folk village near Horehronie and Podpoľanie. In relation to the examination of folk music and instrumentalists, the following statement twice. For this reason a collector's effort Hungarian composer and musicologist of the early 20th century, Béla Bartók, one of the most important and probably the basic assumptions for the reconstruction of the song repertoire of lace-making villages. Bartok effort is significant and therefore the repertoire of communities around Germany innovated more dynamic than in isolated locations: the oldest repertory layers quickly retreated newer songs, and even under the influence of that čipkári as an intermediary "new" brought from his travels fashion achievements in all areas of tangible and intangible culture. Thus, paradoxically, accelerate the decline of others, archaickejších expressions of folklore. Members of the folk group Čierťaž of Germany under the leadership of Martin Loksa (incidentally, a typical enlightened kan-tor) undertook the formidable, but it's nicer job: find the lost songs and make them available through its public activities. CD that you hold in your hands is the result of their long-term interest of traditional German culture and the local environment and a selection of some singing opportunities, and annual family social anthropology. There are songs on it and receipt-work, love, wedding and many more. The basis for their interpretation of the song still works with your own research and collections Martina Lokša at the earliest inhabitants of lace-making villages. For this reason, the CD itself are located along the ancient meadow animated songs from Bartok collection of fashion and dance repertoire of post-war popular pastimes. Folklore Group regularly collaborates with string music, led by Peter Pančík. It works this time the cast cymbal, which follows the tradition of ideological domestic dulcimer bands, which in Germany and around the proven existence. Their production today many do not know, but the musicians were trying his speech conformed to how could such a band in the first half of the 20th century sound. In addition to playing dance smash hit, so in this case. Czardas Fox, and used an unusual instrument - saxophone. This is the 50th of the 20th century occurred in the environment of lace-making villages, and basically the whole territory of Slovakia. Therefore, the musicians returned to this period and I think they managed to revive the sound that now also belongs to the past. CD Čierťaž folk groups is an important step to knowledge of its members own musical traditions also make these traditions to know others. Finally, it provides something that can not physically grasp, yet we like it - nice songs sung and played with enthusiasm. Pleasant listening.

Implementation of the recording: October 2010, a community center Brusno